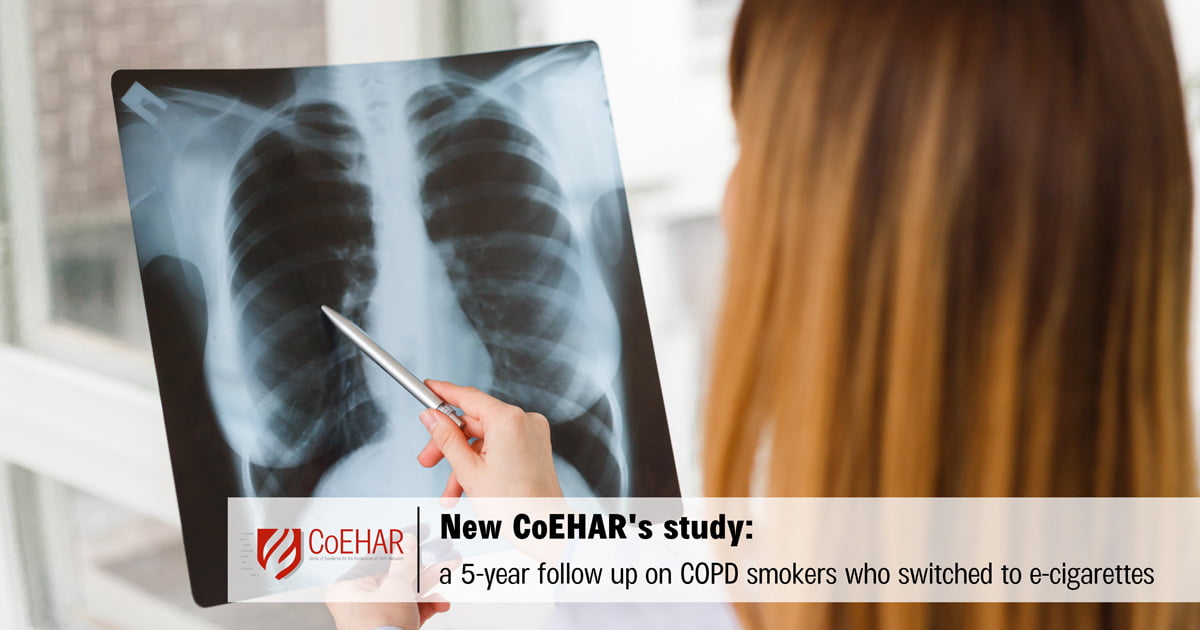 Link: COPD smokers who switched to e-cigarettes: health outcomes at 5-year follow up

Catania, 22th October 2020 – CoEHAR’s researchers have just published the longest clinical follow-up of E-cigarette users ever reported. The study “COPD smokers who switched to e-cigarettes: health outcomes at 5-year follow up” explores the long term effects of E-cigarette use in patients with chronic obstructive pulmonary disease (COPD) and confirms that regular use can ameliorate objective and subjective COPD and is long lasting.

COPD patients who switch from conventional smoking to regular vaping achieve sustained abstinence resulting in a 50% reduction in COPD exacerbations and overall improvement in exercise tolerance and quality of life.

Chronic obstructive pulmonary disease (COPD) comprises a group of smoking-related lung conditions that cause breathing difficulties, and which includes emphysema and chronic bronchitis. The study identified from the medical records of four Italian hospitals, a group of COPD patients using vaping products. These underwent yearly outpatient visits for a total of five years.

By the end of the follow-up, complete datasets were available for 39 COPD patients, 20 in the group of COPD patients using e-cigarettes, and 19 in the control group of COPD regular smokers. Although smoking cessation should be always the top priority for smokers with COPD, high relapse rates are very common in smokers with COPD and quitting therapies (i.e. nicotine replacement therapy – NRT, bupropion, and varenicline) appear to have only fairly small effects on sustained cessation in patients with COPD who smoke. Patients experience difficulty in completely ceasing nicotine use, and they may require prolonged treatment and/or sustained nicotine use to attain continued abstinence from smoking.

An alternative for patients with COPD who are having difficulty at quitting is that of substituting conventional cigarettes with combustion-free nicotine delivery devices (such as e-cigarettes) and to reduce harm from chronic prolonged cigarette smoke exposure.

CoEHAR’s researchers have observed markedand sustained reduction in the daily consumption of conventional cigarettes in COPD patients who were also vaping, with an overall reduction of more than 80% from baseline.

The main finding is that patients with COPD who abstained from smoking by swapping to vaping experienced clinically relevant health improvements. Patients who switched to vaping reduced their yearly COPD exacerbations by about 50% and significantly improved cardio-respiratory health compared to the control population of COPD patients who continued to smoke cigarettes.

The findings of this study are valuable because many COPD patients show little interest in quitting or reducing cigarettes in spite of their symptoms. Switching to much less harmful substitutes may limit the suffering of many COPD patients and their physicians should consider all the options available and opt for the ones that provide the greatest probability of stopping exposure to tobacco smoke, including e-cigarettes.