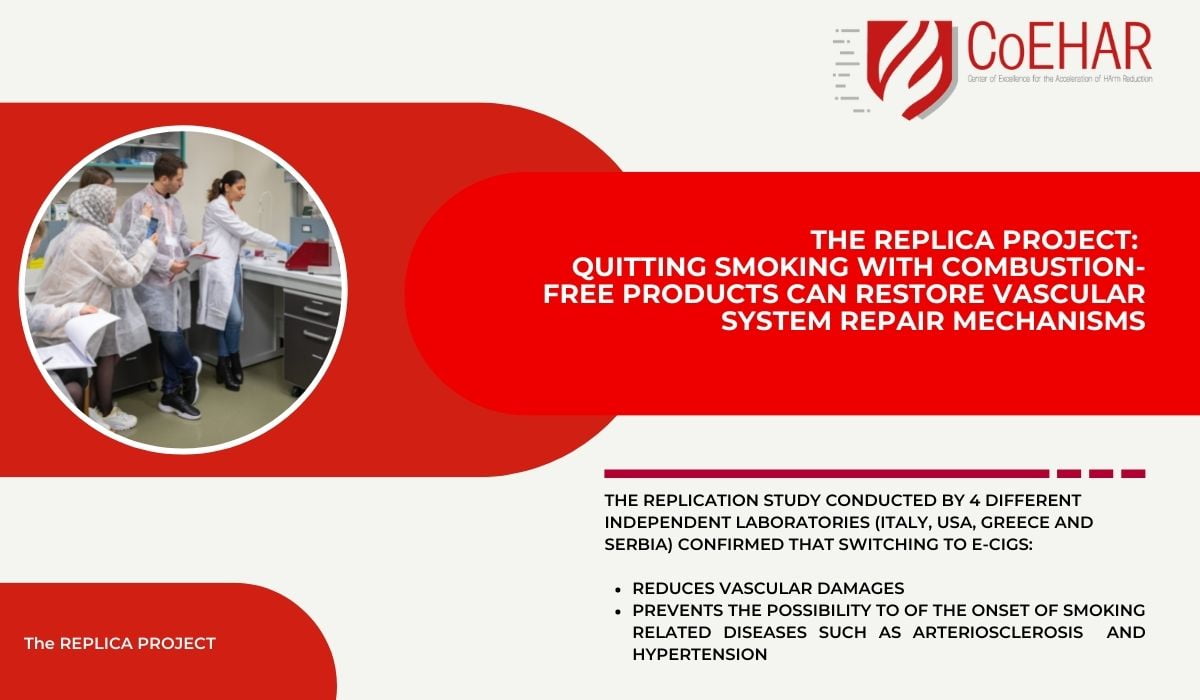 CoEHAR (Center of Excellence for the acceleration of Harm Reduction) researchers, involved in the Replica project, have foundthat switching to electronic cigarettes and heated tobacco products reduce the vascular damage and the onset of smoking-related diseases. The research findings are a strong challenge to the common misconception that using e-cigarettes and heated tobacco can be just as bad as smoking.

The work has been published by the international network of independent laboratories of the Replica project, a group of scientists leading the world in the field of harm reduction. The latest study published evaluated the harm caused to endothelial cells (the cells which release substances that control vascular relaxation and contraction) by cigarette smoke compared to electronic cigarette and heated tobacco products.

Endothelial damage represents the original pathological occurrence that leads to diseases such as arteriosclerosis and cigarette smoking is the initiator. Smoking compromises the normal activity of the endothelium, causing damage to the vascular system and leading to the development of pathologies such as hypertension and arteriosclerosis. Cigarette smoking and the smoke toxicants are associated with impairment of repair mechanisms necessary for vascular endothelium homeostasis, such as the inhibition of endothelial cell migration.

Researchers from the Replica project, one of the most successful projects of the CoEHAR, which in the last two years replicated the most important international studies in the field of tobacco harm reduction thanks to a network of independent laboratories, demonstrated the reduced toxicity of electronic cigarettes and set reference standards for the scientific research. The aim of the scientists of the CoEHAR was to perform a multi-center replication study to verify the results of Taylor and colleagues.

The study, “Comparative assessment of electronic nicotine delivery systems aerosol and cigarette smoke on endothelial cell migration: the Replica Project”, compared the effects of three commercial electronic nicotine delivery systems and a conventional cigarette. Following the international scientific standards and using the most innovative techniques and tools available, data collected by CoEHAR researchers confirmed the results from Taylor and colleagues: electronic cigarettes do not induce the inhibition of endothelial cell migration in vitro as compared to cigarette smoke, reducing the harm caused by tobacco smoke. CoEHAR researchers additionally compared the results obtained with two different heated tobacco products: the effects are much less pronounced than those observed with cigarette smoke.

“As evidenced by previous studies conducted by the Replica project team, the harm caused by electronic nicotine delivery systems is significantly less than the harm caused by cigarette smoke,” explained Prof. Massimo Caruso, author of the study and co-project leader of Replica. “The interesting fact is that switching to combustion-free products reduces vascular damages and prevents the possibility to of the onset of smoking related diseases such as arteriosclerosis and hypertension. Once again, our research has challenged the notion that e-cigarettes or heated tobacco causes similar damage to that of combustible cigarettes””.

The research of the Replica project, led by Prof. Li volti and Prof. Caruso, replicated the results of Taylor and colleagues evaluating the effects of cigarette smoke on endothelial cell migration compared to electronic cigarette aerosol and heated tobacco products: following endothelial injury there is an increased risk of developing vascular diseases such as atherosclerosis.

Scientist artificially recreated small wounds on the cells surface, evaluating their ability to repair following exposure to cigarette smoke compared to every product considered in the study. Four different independent laboratories confirmed the results obtained by the original study of Taylor and colleagues on the ability of endothelial cells to heal the wound area following the exposure to these products.

“The results of this study have a strong relevance in the field of human health prevention policies- added prof. Riccardo Polosa, founder of the CoEHAR- considering that cigarette smoke damages the cardiovascular system and the failure of the current antismoking strategies. These data provide useful scientific information in support of the decision-making process of regulating these products in order to develop evidence-based harm reduction strategies and policy decisions by governments”.

Italian version of the article: LINK

PrevPreviousCoEHAR members calls for reconsider the vaping ban in Bangladesh and sign a letter to the Health Ministry
NextStudy showed that vaping is linked to respiratory symptoms but according to CoEHAR researchers: “No causality proved”Next