Incredibly, people close to an infected vaper using an e-cigarette in home or restaurant scenarios face a one percent increase of risk of contagion compared to the control case of a normal breathing (without vaping) inside closed spaces. This relative added risk becomes 5-17 percent for high intensity vaping and up to 260 percent for speaking for various periods and coughing. 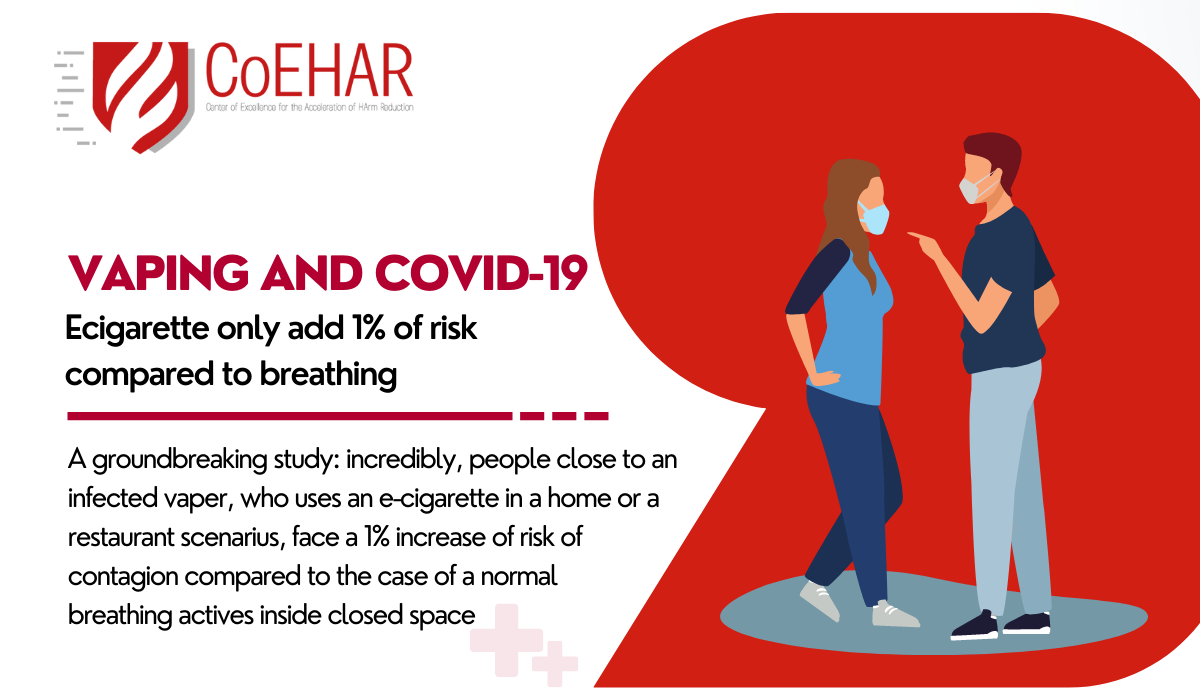 What if I’m sitting close to a vaper with no mask? A new study shows that e-cigarettes only add 1% of risk compared to unavoidable continuous breathing

Catania, 30 June 2022- The restrictions imposed by the last two years of the pandemic are slowly coming to an end, but the fear of the contagious from Covid-19 still creates doubts among citizens of every nation. Will it be safe to eat in restaurants? Which is the level of risk associated to social activities inside closed spaces?

Surprisingly, there is a lack of knowledge of the possible transmission of Covid-19 through exhalations of e-cigarette aerosol. This is a relevant issue: the increasing popularity of vaping as a safer way of nicotine consumption and the possibility of vaping inside closed spaces have given rise to the need to estimate the possible risk of Sars-Cov-2 virus aerial transmission associated with cigarette exhalations.

A pool of international renewed scientists developed a theoretical risk model for explaining how the visibility of exhaled ECA has safety implications that are absent in other respiratory activities. The study, “Analytic modeling and risk assessment of aerial transmission of SARS-CoV-2 virus through vaping expirations in shared micro-environments”, analyzed the risk of contagion at home and restaurant scenarios, with natural and mechanical ventilation, with occupants wearing and not wearing face masks.

Incredibly, people close to an infected vaper using an e-cigarette in home or restaurant scenarios face a 1% increase of risk of contagion compared to the control case of a normal breathing (without vaping) inside closed spaces. This relative added risk becomes 5-17 % for high intensity vaping and up to 260 % for speaking for various periods and coughing.

All the data must consider factors such as covid-19 variants, vaccinations status and environmental factors (variations of temperature and humidity, air pollution and atmospheric dynamics). Given the absence of empiric data on this issue, the researchers assumed as a working hypothesis that all respiratory activities were equally affected by these factors.

“It is well known that Covid-19 is a disease that is transmitted mainly due to small particles in the air” explained Roberto Sussman, professor of physics at the National University of Mexico “studying which kind of breathing activities can add extra risks is fundamental. The risk model in the study, even with specific limitations, explains that normal vaping only adds 1% of risk in a home or restaurant scenario: besides this fact, bystanders close to a vaper can actually visualize the aerosol emission and this represents an extra intuitive precaution that can help them avoid infected particles”

“Let’s no longer stigmatize vapers” added prof. Polosa, founder of the CoEHAR “This is the first study to theoretically assess the contagion risk of vaping in indoor spaces: of course, the Covid-19 pandemic is a very complex phenomenon and the model we developed needs to be adapted in light of possible viral variants, safety measures such as face mask and vaccination campaigns. However, it’s clear that vaping only added a small percentage of contagion risk, less than normal breathing activities like speaking and coughing. In this very crucial moment, when everybody is trying to get back to normality, it is important to remember that we need to trust science and the development of medical solutions to end this pandemic for good, instead of being worried about a habit, such as vaping, that can save the lives of smokers all around the world”

THE RISK MODEL: A groundbreaking study

The study considered the inferred data on exhaled tidal volumes, emission rates, type of respiratory droplets and exhalations distance spreads, as well as the visibility of these exhalations. The researchers focused on the exposure to Covid-19 virus potentially carried by a mass of droplet already emitted and present in indoor spaces, without considering if the exposure was direct or indirect.

It is safe to assume that people sharing indoor spaces will avoid exposure to direct respiratory fluxes and thus will be mostly subjected indirect exposure by desiccated droplets known in the medical literature as “aerosols”. Another aspect to evaluate is the significant shortening of the exposure time because of the intermittent and episodic nature of vaping.

The scenarios considered were different: a home (one infectious vaper and three exposed susceptible family members), a restaurant with 30 costumers with natural ventilation (keeping an open door) and the same restaurant endowed with mechanical ventilation.

Mask wearing was not considered in the risk evaluation. Even in a restaurant or bar scenario, patrons are likely to remain maskless for extended periods because masks must be removed for eating and drinking (as with vaping). Once outside the direct exposure zone (visible and delineated for vaping), bystanders wearing common usage face masks would be facing practically the same risks from indirect exposure as in spaces in which no vaping took place.

Vaping expirations represent a minimal increase of risk with respect to continuous breathing in home and restaurant scenarios with natural and mechanical ventilation: 1% for the most frequent low intensity vaping and 5–17% for the infrequent high intensity vaping style. Visibility of vaping expirations is protective, as it allows avoidance of the high risk of direct exposure. 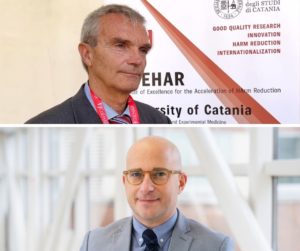 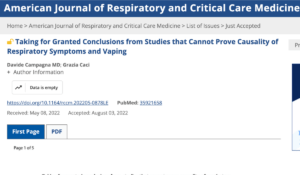 Study showed that vaping is linked to respiratory symptoms but according to CoEHAR researchers: “No causality proved”