Evidence for Clinicians: E-Cigarettes a Better Chance at Health 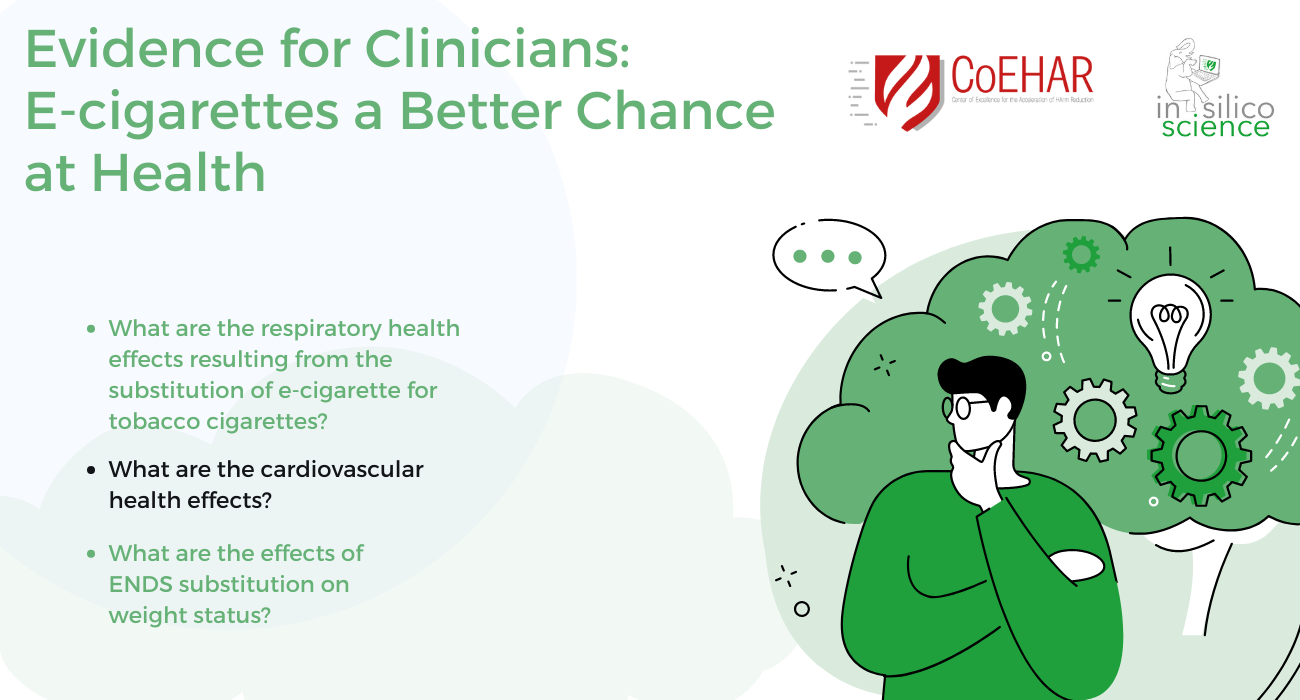 Tobacco Kills: It is a well-known fact since the 1950s that tobacco use kills and is still killing today.

Tobacco is addictive. It captivates its users, who lose the ability to control their tobacco use and cannot employ their free will.

So, what is the way forward to help those who use tobacco, particularly people who smoke? Some medical organizations are responding by advocating the substitution of e-cigarettes for smoking.

“There is substantial evidence that except for nicotine, under typical conditions of use, exposure to potentially toxic substances from e-cigarettes is significantly lower compared with combustible tobacco cigarettes” (US National Academies of Sciences Engineering and Medicine).

“The Royal College of Physicians (RCP) encourages people who smoke to switch from cigarettes or other combustible forms of tobacco to the less toxic and potentially safer e-cigarettes”.

To bring forward the best available evidence on the health effects of e-cigarettes on human health, our research team conducted a series of robust and exhaustive systematic reviews to answer the following questions:

The In Silico Science Systematic Reviews include:

What have we learnt from our systematic reviews? We found evidence for a better chance for health with the substitution of e-cigarettes because unlike cigarettes they do not cause worsening of health over the long term.

The collected key findings from 52 articles on e-cigarette substitution:

The respiratory review covers sixty tests. Noteworthy results were seen in a study with 16 mild to moderate asthmatics after 24 months. E-cigarette users experienced improved lung function (FEV1, FVC and FEF 25-75 tests). Better outcomes were achieved with exclusive use of e-cigarettes compared to participants who used both cigarettes and e-cigarettes.

In a five-year study of chronic obstructive pulmonary disease (COPD) the patients obtained significant improvements as shown by FEV1 tests. The participants were 61 to 72 years old, so exclusively substituting e-cigarettes even at older ages may lead to transformative improvements in lung function over a longer period.

In contrast, a study that had e-cigarette users assigned to use tobacco cigarettes, they had a worsening of their respiratory functioning (decrease in FVC and FEV1 tests).

Twenty-two studies measured the effect of e-cigarettes on heart rate. Twelve acute testing studies yielded mixed findings. In some cases, heart rates went up significantly with e-cigarette use, but in several studies the increase was less than from cigarettes.

Finally, for weight gain concerns, a weight gain of at least 7% of baseline weight after 12 months is defined as a clinically significant weight change. The weight review contained only one study with a statistically significant, but not clinically relevant weight increases with e-cigarette substitution (exclusive use and with dual cigarette use) averaging only 1.2 kg after 12 months.

Understanding nicotine effects. Smoking for the nicotine but dying from tar!

Nicotine remains controversial and misunderstood. Evidence-based science shows that although nicotine is addictive and habit forming, it is not carcinogenic.

The World Health Organization (WHO) has approved nicotine replacement therapy (NRT) as an essential medicine calling it a safe and effective treatment to quit tobacco.

E-cigarettes have been described as 95% safer than tobacco cigarettes by the Royal College of Physicians (UK).It is critical to understand that it is not the nicotine in cigarettes that causes cancer, rather the thousands of toxins.

For cardiovascular effects of nicotine, it has hemodynamic effects but a limited role in cardiovascular diseases. Nicotine, being a stimulant, can lead to changes in heart rate, myocardial contractility, and blood pressure. On the other hand, nicotine appears to have no clinically relevant effects on the respiratory system.

So, what is the effect of nicotine on weight?  Nicotine causes an anorexic effect by suppressing appetite. Concurrently, nicotine increases metabolism through increased fat tissue breakdown (lipolysis) and decreased fat production (lipogenesis).

Unfortunately, when patients quit smoking, they may replace it with binge eating as a coping strategy, thereby leading to weight gain. While the use of nicotine gum for cessation has been shown to help maintain weight status, other pharmacological cessation therapies, varenicline and bupropion, have not shown effectiveness in controlling body weight.

Physicians need to correct their misperceptions about nicotine, particularly if they are to accept nicotine use with e-cigarettes as a harm reduction strategy.

The systematic reviews identified biases and reporting spin in too many studies. How do you identify biased studies and spin?

Other sources of bias we identified were (1) the absence of a published protocol, (2) unexplained deviations from the protocol, (3) small sample sizes, (4) participants not representative of actual smokers, and (5) e-cigarette exposures far greater than real life use. Some studies used different e-cigarette models, which complicates interpreting the results.

2.The acute studies did not show clinically meaningful worsening of pulmonary function with e-cigarette use in healthy participants

3. Acute changes in outcomes do not account for the harm already incurred from years of smoking.

4. Cardiovascular test measurements can be transient and linked with the activation of the sympathetic nervous system from nicotine, producing an increase in HR, BP, and myocardial contractility.

The findings from our systematic reviews that demonstrate a better chance for health with e-cigarette substitution are further validated by the latest Public Health England report. They stated that there are “substantial health benefits” from switching entirely from smoking a tobacco cigarette to vaping.

Evidence from a Cochrane review of 61 completed studies with 16,759 participants showed various aspects of cessation. Quit rates in people randomized to e-cigarettes were higher than those randomized to NRT, risk ratio (RR) 1.53. This translates to an additional three quitters per 100 (95% CI 1 to 6). This is not weak evidence – it was rated as moderate certainty.

The National Pharmacy Association (NPA) UK states that “now clear that e-cigarettes have a legitimate place in smoking cessation underpinned by professional advice.”  It said the Public Health England’s report would help pharmacists provide advice to people keen to quit but also help pharmacies decide whether to stock e-cigarettes for sale.

So, for quitting smoking, and for the other potential health benefits we found in our systematic reviews, we can state with certainty that e-cigarette substitution offers a better chance at health than continued smoking.

PrevPreviousCovid-19: ecig only add 1% of risk compared to breathing
NextCoEHAR members calls for reconsider the vaping ban in Bangladesh and sign a letter to the Health MinistryNext