Riccardo Polosa: "In Italy, even today, we don't have a health policy that takes care of these people. Risk reduction represents the solution, an extraordinary opportunity for change and acceleration in terms of individual and public health. I consider it serious to insist on hiding from citizens the real opportunities offered by potentially low-risk instruments, even pointing them out as dangerous on a par with conventional cigarettes. 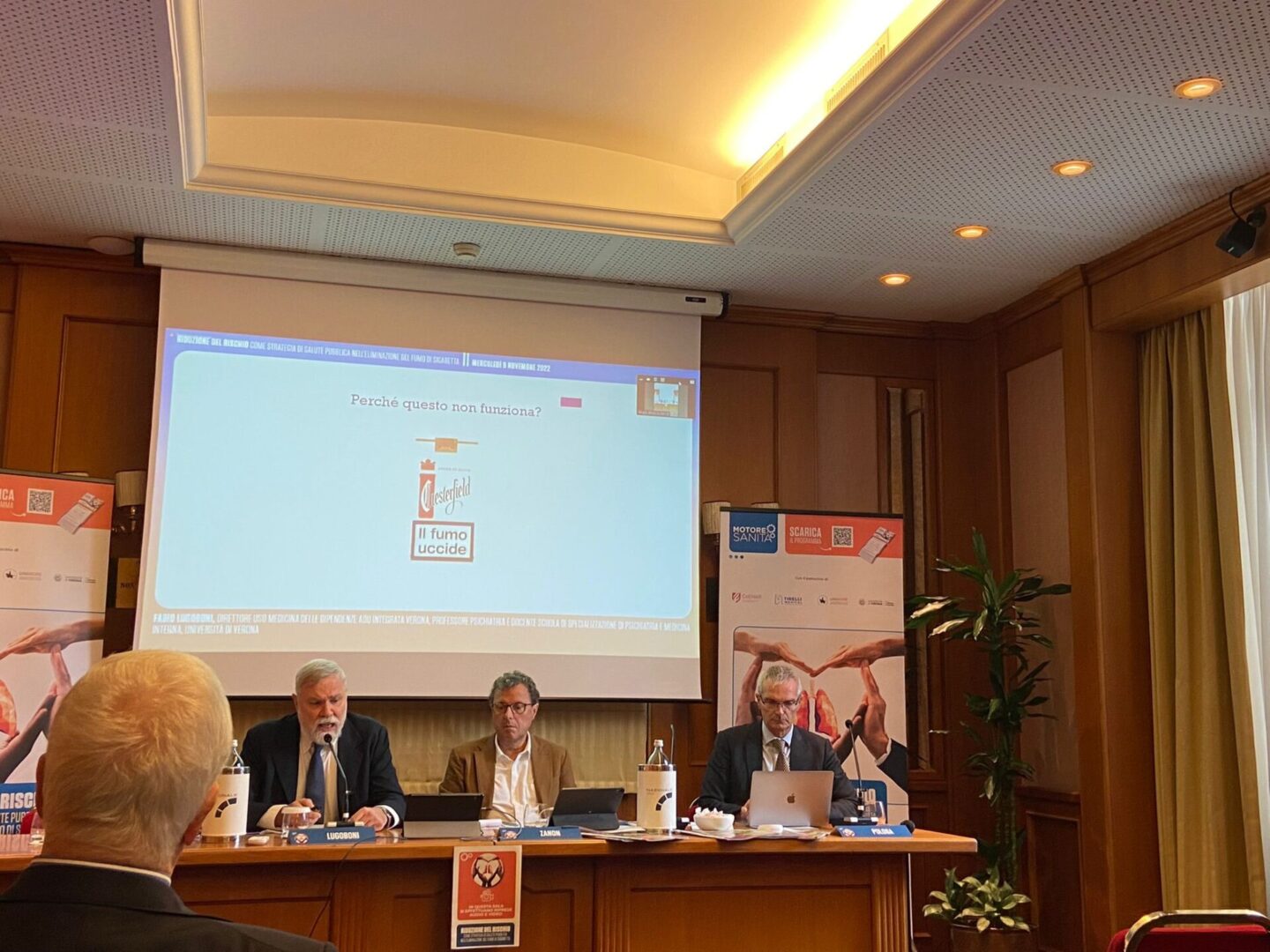 A press release by motore Sanità

Smoking seriously damages human health, yet there are 12.4 million smokers in Italy: 24.2% of the population (Campania, Umbria and Abruzzo are the regions where people smoke the most).

Furthermore, in the last year there has been an increase of 800 thousand units compared to the 2019 figure, which is also explained by the Covid pandemic effect, given that compared to 2021, in 2022 there is a decrease of two percentage points in the prevalence of the cigarette smoke. In Italy, the Ministry of Health estimates that 93,000 deaths per year are caused by smoking and these data have brought the issue of cigarette smoking to the attention of scholars and the media. This was discussed during the event: “RIDUZIONE DEL RISCHIO COME STRATEGIA DI SALUTE PUBBLICA NELL’ELIMINAZIONE DEL FUMO DI SIGARETTA“, created by Motore Sanità.

Umberto Tirelli, Health and Scientific Director of the TIRELLI MEDICAL Group Clinic, ex Head of Oncology at the National Cancer Institute of Aviano declared: “The most important risk factor for tumors is cigarette smoke, which burn and emit 60-70 carcinogenic substances. It is not nicotine that is the main cause of related diseases, but the carcinogenic substances that are in the smoke of burning cigarettes. Quitting and not starting smoking are always the best solutions, but quitting is difficult for many, for these smokers switching to non-combustion products – as suggested in Great Britain and New Zealand by health authorities because it is considered potentially less harmful – would be advisable compared to continuing to smoke cigarettes”.

“It is a fact that in Italy there are millions of smokers who do not want to or who are unable to quit“, confirmed Riccardo Polosa, Full Professor of Internal Medicine, Director of the School of Rheumatology Specialization and Founder and Director of the Center for Tobacco prevention and treatment at the University of Catania – Director of UOC Internal and Emergency Medicine, AOU “Policlinico-V. Emanuele”, Catania, Founder of CoEHAR (Center of Excellence for the acceleration of HArm Reduction). “They do not accept to be medicalized because of their smoking habit. In Italy, even today, we don’t have a health policy that takes care of these people. Risk reduction represents the solution, an extraordinary opportunity for change and acceleration in terms of individual and public health. I consider it serious to insist on hiding from citizens the real opportunities offered by potentially low-risk instruments, even pointing them out as dangerous on a par with conventional cigarettes. We need to stop emphasizing the risks without considering the benefits. Italy must turn the spotlight back on anti-smoking awareness, integrating the precautionary principle with that of reduced risk”.

Fabio Beatrice, Director Emeritus of Otorhinolaryngology in Turin, Founder of the Centro Antifumo Ospedale SG. Bosco of Torino and Scientific Director of the Board of MOHRE, drew attention to the Anti-Smoking Centers, considered “the best approach of the Health System in the fight against cigarette smoke”, but these have decreased and “there are currently 223. The Region with more anti-smoking centers is Piedmont. Unfortunately, the turnout in the anti-smoking centers is very low and smokers who tend to try to quit on their own largely fail. Furthermore, more than 50% of smokers who turn to anti-smoking centers are unable to quit, even in compliance with the guidelines. It is believed that it is necessary to question the failures, reviewing the policies to combat smoking more generally and the prevention policies to prevent the initiation of the new generations”.

“Unfortunately, smoking cessation tends to be viewed as a personal issue, tied to willpower alone”, stated Fabio Lugoboni, Director of USO Medicina delle Dipendenze AOU Integrata of Verona, Professor of Psychiatry and Lecturer at the Scuola di  Specializzazione di Psichiatria e Medicina Interna at the University of Verona. “Smoking, on the other hand, is a legalized addiction, and requires specific support and therapy, otherwise causing a high failure rate,” said Lugoboni. “Self-attempts tend to fail 80% of the time within the first week. Every doctor, every health worker must do his part, but this is not happening, also because in Italy one in 4 doctors smokes, against 3% of smoking doctors in Great Britain and the USA”.

Francesco Saverio Mennini, Professor of Health Economics and Political Economy and President of the Italian Society of Health Technology Assessment, added “It is also necessary to make decision-makers understand the costs of cigarette smoking incurred by the system as a whole, in terms of hospitalizations, skills and diagnostic tests, disability and loss of productivity. It would therefore be ideal to create a study that analyzes the economic savings at 360° if smokers switched completely to smoke-free systems.”

Senator Francesco Zaffini, President of the Senate Social Affairs and Health Commission, also took part in the round table, bringing institutional greetings, stating that “it is appropriate to examine the harm reduction strategy, together with a broader addiction prevention strategy”.

PrevPreviousNew frontiers in the care of people with schizophrenia: low-risk products are a valid substitute for smoking
NextPolosa, Pakistan: first speech on tobacco harm reduction strategiesNext